Last weekend saw us heading up to Pismo Beach, with my dad, my brother, and my dad’s newly restored jeep, dubbed the Purple Buggy. It was a very exciting day for me and my brother because we spent a LOT of time in the back seat of this jeep when we were little. I still remember how excited I would get when dad would bring us to school in this baby. There are countless camping adventure memories that come to mind.

We were planning to go back in the dunes and camp for the night, so we were prepared and expecting a touch of protection behind a dune. This would be the first beach trip with Baby Wagon as well, so we were doubly excited.

It was a cool, drizzly day in Pasadena, where we started, and it just got colder as we headed up the windy coast. As we neared Pismo, I started feeling bad for my dad and brother who were riding relatively unprotected from the elements.

Since dad was planning only a quick turn around, we headed straight for Grover Beach, where the entrance to the dunes is. His plan was to play for a while, and head back before dark. Since this was the first long trip the jeep had taken since it had been restored, we all wanted to be sure that it could make the trip safely.

Despite some very minor issues, it made the trip beautifully, and we played in the dunes for about an hour, then parted ways to find a camp spot and get them on the road early.

It just kept getting windier, and the few times that we got Baby Wagon out to play, she seemed miserable. Not even to mention, that because the sand was blowing around in the wind, we had to be really careful about her eyes (she wont keep sunglasses on her face or a hat on her head), so we left the beach in search of a better campground. We didn’t want to be trapped in our little trailer all night, since it was still pretty early, and it didn’t seem fair to her because she had been in a car seat for a good portion of the day.

While stopping for an early dinner at La Costa Grill, we decided to peruse some hotel websites. It seemed that all the local camping areas were full, and now we were seeing predictions for rain, which doesn’t usually stop us, but we wanted the baby to be able to get out and play a bit since she had been in a car seat for most of the day. Between the two of us searching a couple websites, we found something we felt we could afford.

We ended up staying just a mile from the center of San Luis Obisbo. After letting Baby Wagon run around a bit, we decided to walk to an ice cream place that had been recommended to us, called Dr Burnstein’s Ice Cream lab. Its an adorable and visually entertaining little Ice Cream Parlor, with a train running though the brightly colored store and larger than life Ice cream cones. The ice cream is touted as the best on the central coast, and it certainly lives up to its name. We caught the trolley in for $.50 each, no charge for the baby, and hoofed it back. Thank god for the Ergobaby carrier!

The hotel offered a great breakfast the next morning, so after chowing down, we headed back into Pismo to play after bit more and see if the wind had died down a bit.

It had, some what, but unfortunately, it was just windy enough to blur the sand and make it hard to see steep drops, so we didn’t hang around. We got Baby Wagon into the warm sand a bit, then decided to get an early start home. On the way out, Cris was able to dig a little Dodge out of the sand with his rarely used Max Trax. Poor guy had been sitting there for over an hour with “helpers” just digging him deeper. When we found him, he was nose down and buried to the axles. Cris had him out in about 20 minutes. The video below is the second round coming out of the hole.

All in all, not at all how we had planned to spend the night, but still had a great time! 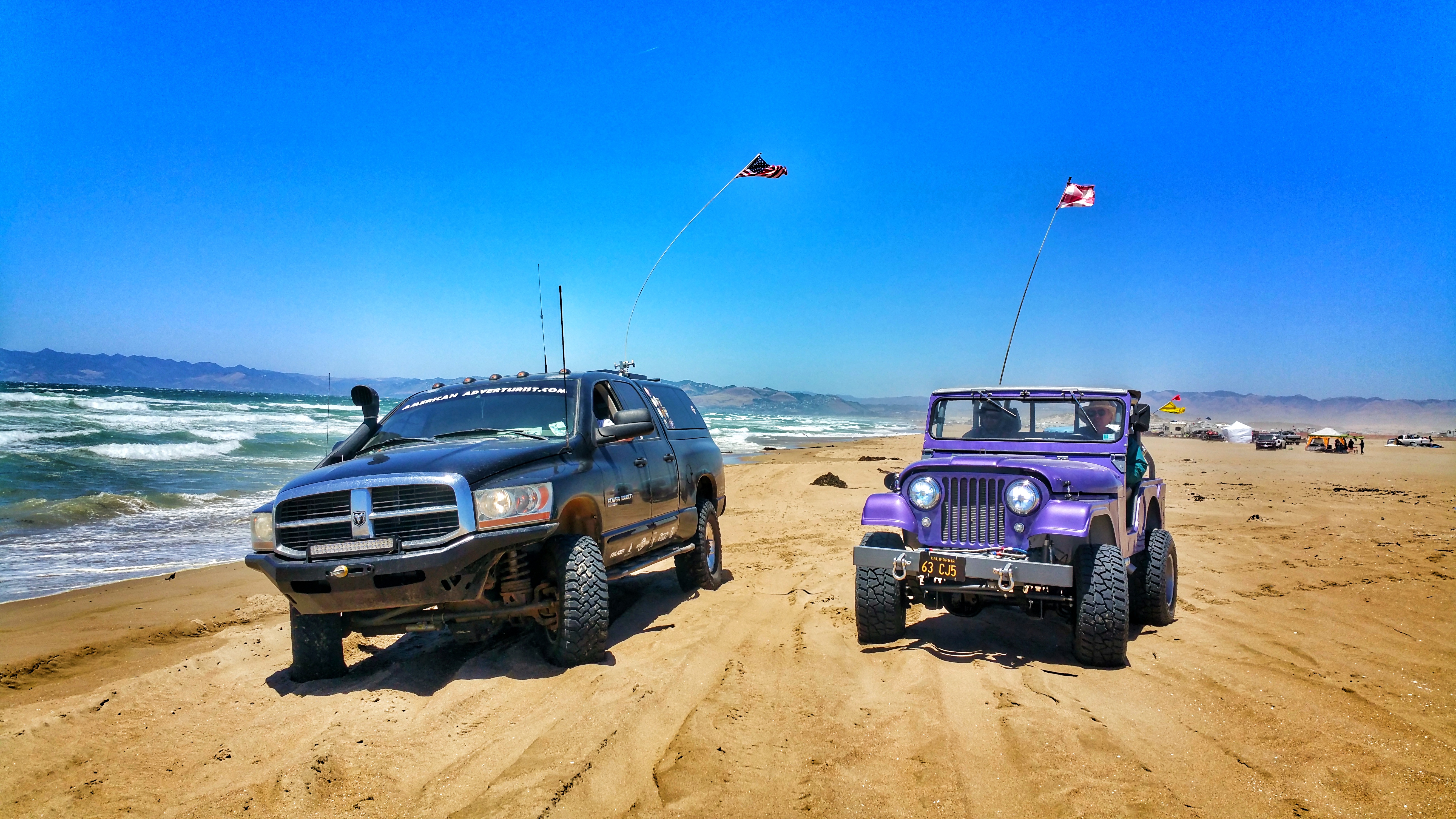 1 thought on “Pismo with the Purple Buggy”

Got all of the rigid insulation in the @ovrlndcamp

Still mentally in some random Aspen Grove in the m

Day one of our trip last week saw us visiting some

@familyoffthemap got her first ride on a "quad" at